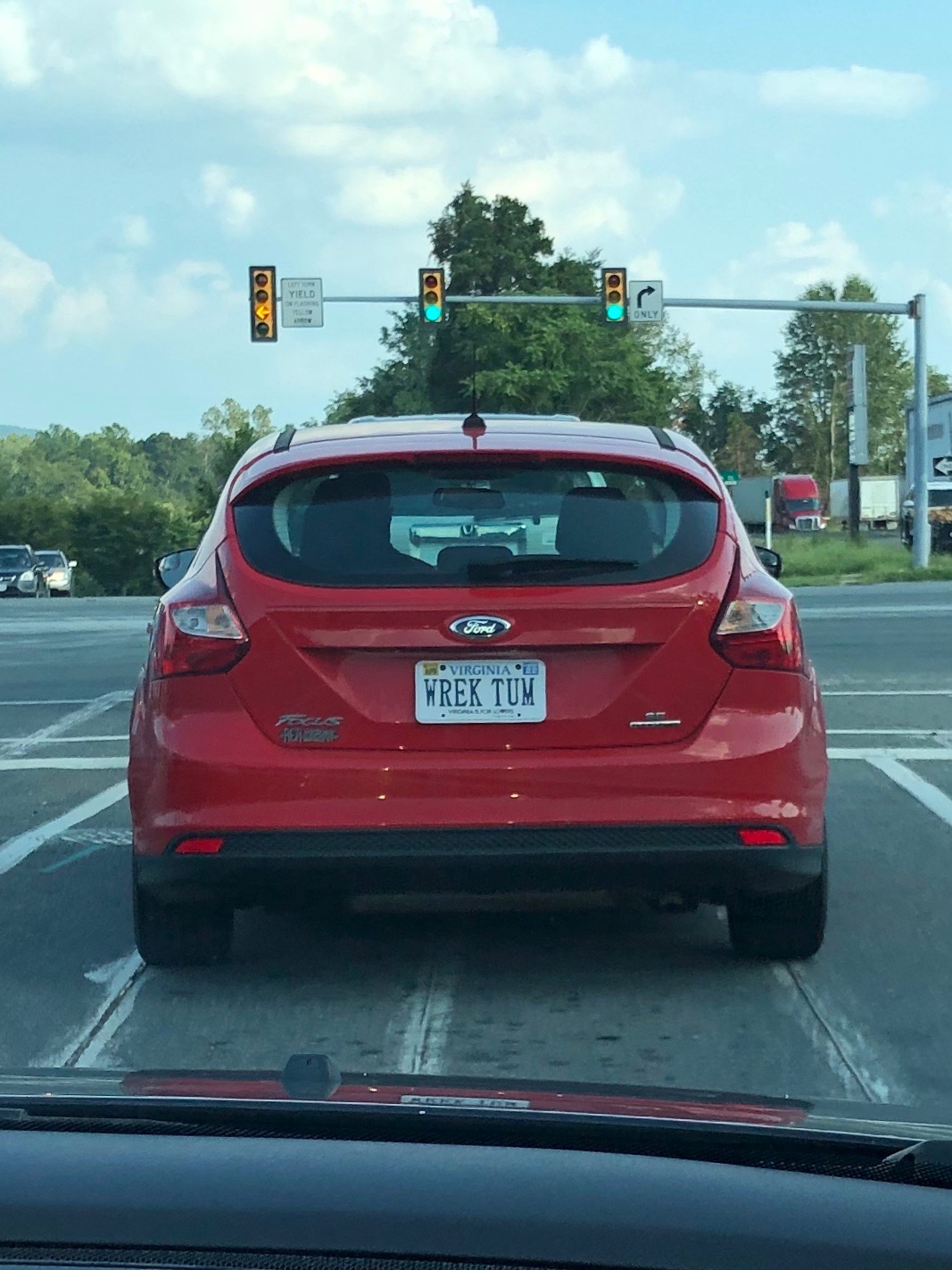 Back end (heh heh) of a car in C-ville last week. Had to share the picture!

Marshall and I met with my oncologist last week and the meeting actually went extremely well.

I’ve made some decisions:

First, I need to share with you the unbelievable and unexpected ease of these decisions. It was nothing short of miraculous to me, especially given how weighty they’ve felt for the past two weeks or so. I felt so light coming out of my oncologist’s office it was almost funny. Hey, I’ll take it – so much better than the alternative! Thank you for all your continued thoughts and prayers – these are what lift me. I am very grateful.

The decision about where to have the surgery came first. I talked to my doctor about the glow juice I could drink to make my cancer cells light up during surgery and it turns out my oncologist has a lot of experience with this glow juice from when he was at Dartmouth. Apparently, it’s usually used for higher grade gliomas than mine because higher grade gliomas glow more than lower grade gliomas do. So, it would give the surgeon more information during the surgery, but minimally more. So I don’t really need it if I don’t want it.

Then the question becomes whether, if I don’t really need it, I want to be the first patient my surgeon uses the glow juice on.

I asked my oncologist for another surgeon’s name for a second opinion and he gave me the name of a surgeon in California. We discussed how there are no guarantees of success in surgery no matter who does it or where it’s done. Not that it’s unimportant to have a great surgeon and the best equipment – it is. But I already have both of those at UVA.

Other things are important, too, besides the surgeon – like having my family and friends with me before and after surgery and as I recover. And not pulling Hannah out of school and not dragging my parents cross country to stay in some hotel while I have my surgery. And not worrying about flying home after surgery, when chances of blood clots may be higher. And just being able to be home.

The surgeon who did my surgery last time did a great job. I have absolutely no complaints with how things turned out. If I don’t want him to do the glow juice, he doesn’t have to, and not much will be lost. And if I want him to do it, he will. I can figure that out later.

For now, I’ve realized that I feel completely comfortable having my surgery with him again at UVA. This is a huge, huge relief.

I will also be waiting to have my surgery until next year – probably early January. This is a total surprise because we were all set to give up on going to Puerto Vallarta for Christmas and were even considering not going to Hawaii for our 30th anniversary at the end of October.

I really questioned my oncologist about the timing of these trips and he felt sure that we could (and should) do both – that the cancer would not grow enough in that time frame to cause any problems with having surgery in January. In fact, he’d told us before that we could still adopt a “watch and wait” stance even now, although surgery feels like the better recommendation. I know he’s the type of doctor who would not say this there was real risk in waiting.

I have to say, this was an unexpected joy to hear and an unanticipated balm to my heart. I had been trying to plan as many trips for our family as possible while I’ve been feeling well, knowing that the cancer was “supposed to” come back. Traveling is something our family discovered we loved to do together when I had the chance to teach on Semester at Sea in 2012 and 2014. When I heard the cancer was back I felt like we couldn’t go on these trips and it made me quite sad. Thirty years is something to really celebrate. And so is the family that has grown from those 30 years. I really wanted to be able to take Hannah to Puerto Vallarta, too – for all three of us to be able to go somewhere special together. Now we can. And I am VERY excited!

Also, pushing off the surgery until next year takes some of that immanent pressure off. I am not having surgery in a couple of months – I’m having it next year. That just sounds better.

Plus, maybe pushing it off will allow my surgeon to get some experience under his belt with the glow juice.

The last big decision was what the course of treatment would be after surgery – radiation, chemo, or both.

Radiation + chemo is supposedly the “gold standard” of care because it supposedly gets you more time – maybe 5-7 years more, which is nothing to sniff at. But even so, doctors treat people with lower grade gliomas in a wide variety of ways. There is no real consensus on what to do.

My bottom line is that I am afraid of radiating my brain. It’s just plain bad news. There are many possible side effects and once you do it, you can’t undo it. The damage is done and continues happening forever after.

So, I’ve decided not to have radiation.

This decision was a huge relief, too. I get to choose. I get to decide. And this is what I decide. At least for now.

So, I’m choosing chemo. There a couple of different kinds to choose from, but we’ll nail that down later.

It’s so funny how my perspective has changed – today I am relieved to be getting chemo, whereas the thought of having chemo a few months ago felt like something that was just too too scary to even think about. I guess it’s all about perspective. Chemo is a relief when compared to radiation.

But all that is NEXT YEAR! For now, I’m looking forward to planning our trip Hawaii!

I am checking your blog after not having checked it in a while. I am always praying for you, though. You said you were going to have your surgery in early January so I’m hoping all went well with that and you have just been too busy and happy and excited with life to blog. Thinking positive here!

Just seeing your blog after some time. I imagine you have had your surgery — we send you lots of healing energy! You are in our thoughts!

Fran – Not sure you’d remember me, but we had a delightful booksigning for your fabulous When The Whistle Blows out here in Montrose, California. I am a colon cancer survivor – surgery, chemo – and my thoughts and prayers are for you and your family. I hope you have had enjoyable family trips as that is also what I did during a hiatus from my 18-months of chemo. When I talk with other folks with cancer, I tell them what worked with me was that I would visualize .”..just past the horizon.”. I wanted to reach beyond what could be seen.
I trust you are ready for what’s in the plans for 2020 and we are all rooting and praying for you. Joyfully yours,
Maureen Palacios, Once Upon a Time

Maureen! Of course I remember you! Thank you for getting in touch. I am sorry you’ve been on a similar journey, but glad for connecting. I, too, have been using visualization for my future. Thank you for your prayers – please keep them coming!

Fran, it’s been a while since I’ve visited your blog and so glad to know you will be taking your trips to celebrate your anniversary and have some fun. That picture! You’ve not lost your sense of humor. I’ll be praying for you to have a successful surgery.

Fran- I am so glad to hear you have some clarity, and a plan, and can take those trips. We are all rooting for you. If it is helpful to read about others’ journeys, you should check out my brother’s blog “Two Sides of a Lifetime.” https://doug-smith.com/ If reading about other cancer patients’ journeys is depressing or just not something you feel like doing, don’t worry about it 🙂

Prayers are continuing for you and your family Fran. Prayers also for safe travels and wonderful experiences. God bless.

This is beautiful news! Prayers will continue to bath you in peace and guide your journey.
With joy! Adriana

Thanks, Adriana. Prayers for you, too!

Looking forward to pictures from Hawaii and Puerto Vallarta!

Fran, we’ve been following your news and thinking about you daily. No one should have to ride this rollercoaster but you are… a strong rider. Your positivity above is testament to that. I’m so heartened that you are at ease with this plan and that the three of you will be getting a double treatment of surf. Prep for Hawaii: “da kine.” Our love and support to you and Marshall and Hanah — Mark and Kim

Thanks so much, Mark and Kim. I watched a video on da kine. Pretty sure I’m too uptight to get it. Will work on that at the beach:)