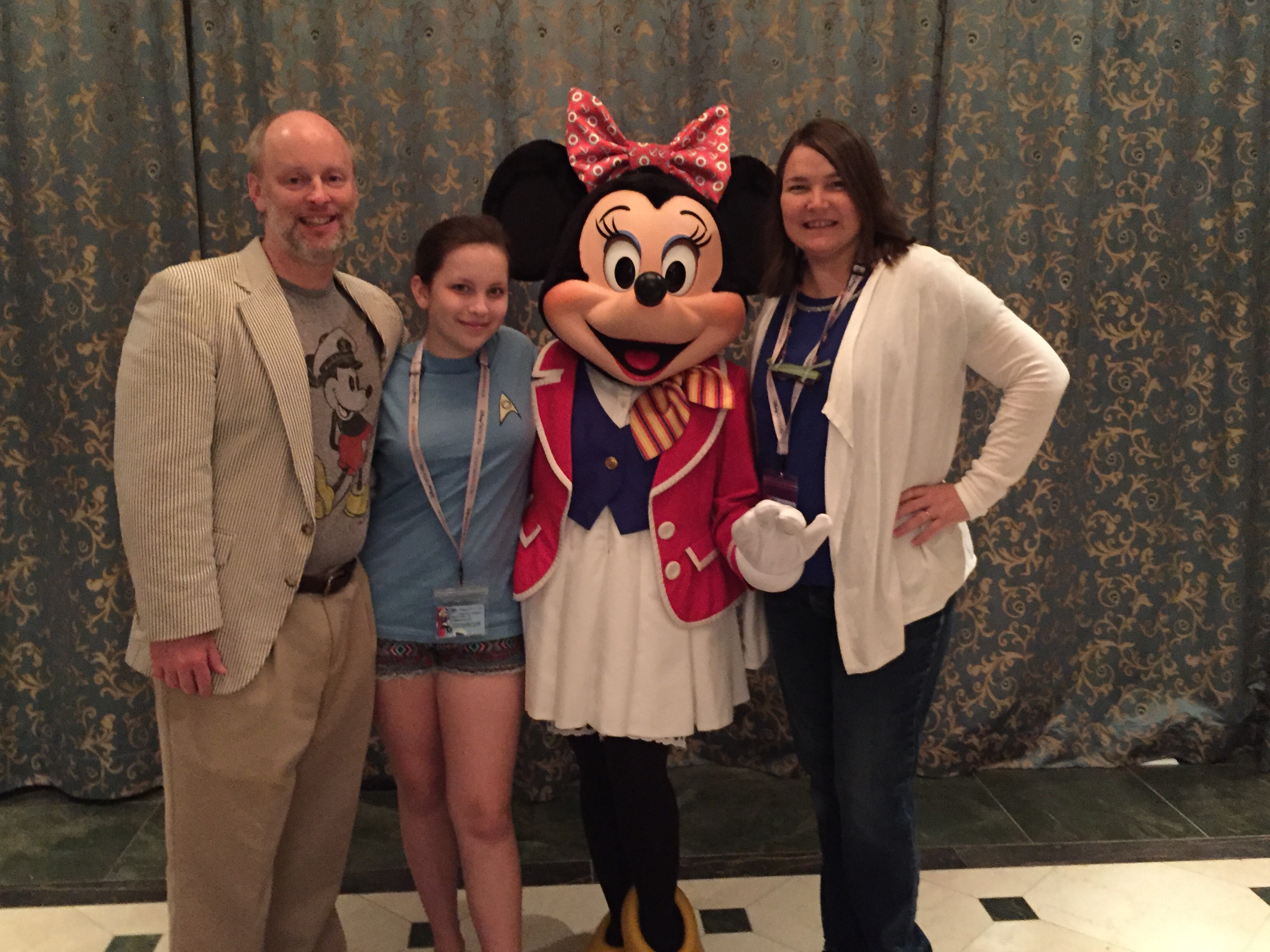 It was really great to get out of the house!

Wow, was it ever good to get out of the house, to get out of the “recovering from cancer routine” at home, and to get out of my comfort zone a bit!  The whole family needed a vacation after all that has happened since my diagnosis in January.  It was great to just leave it all behind for awhile.

The ship was just beautiful! 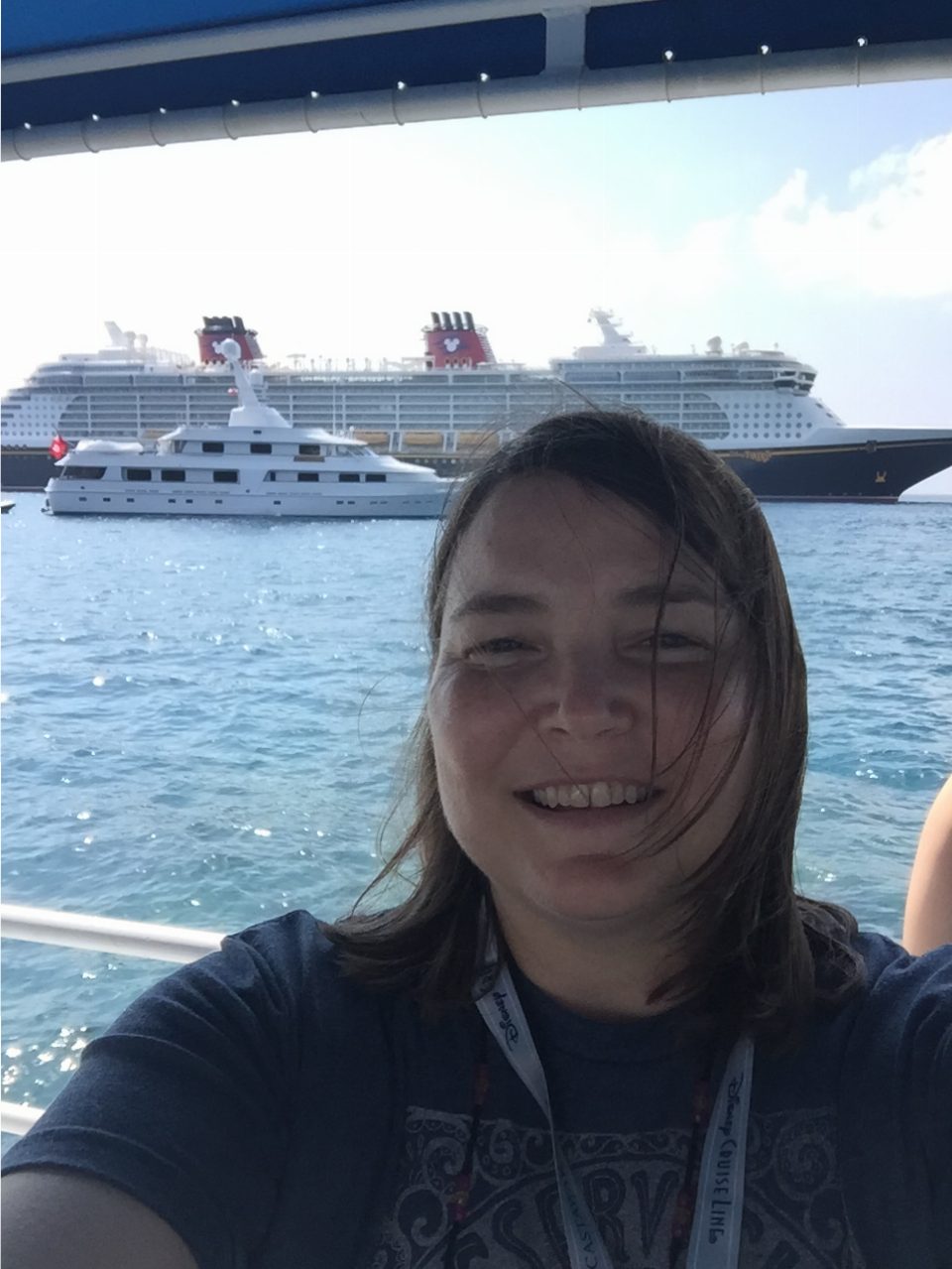 And the weather (for the most part) and scenery were terrific. 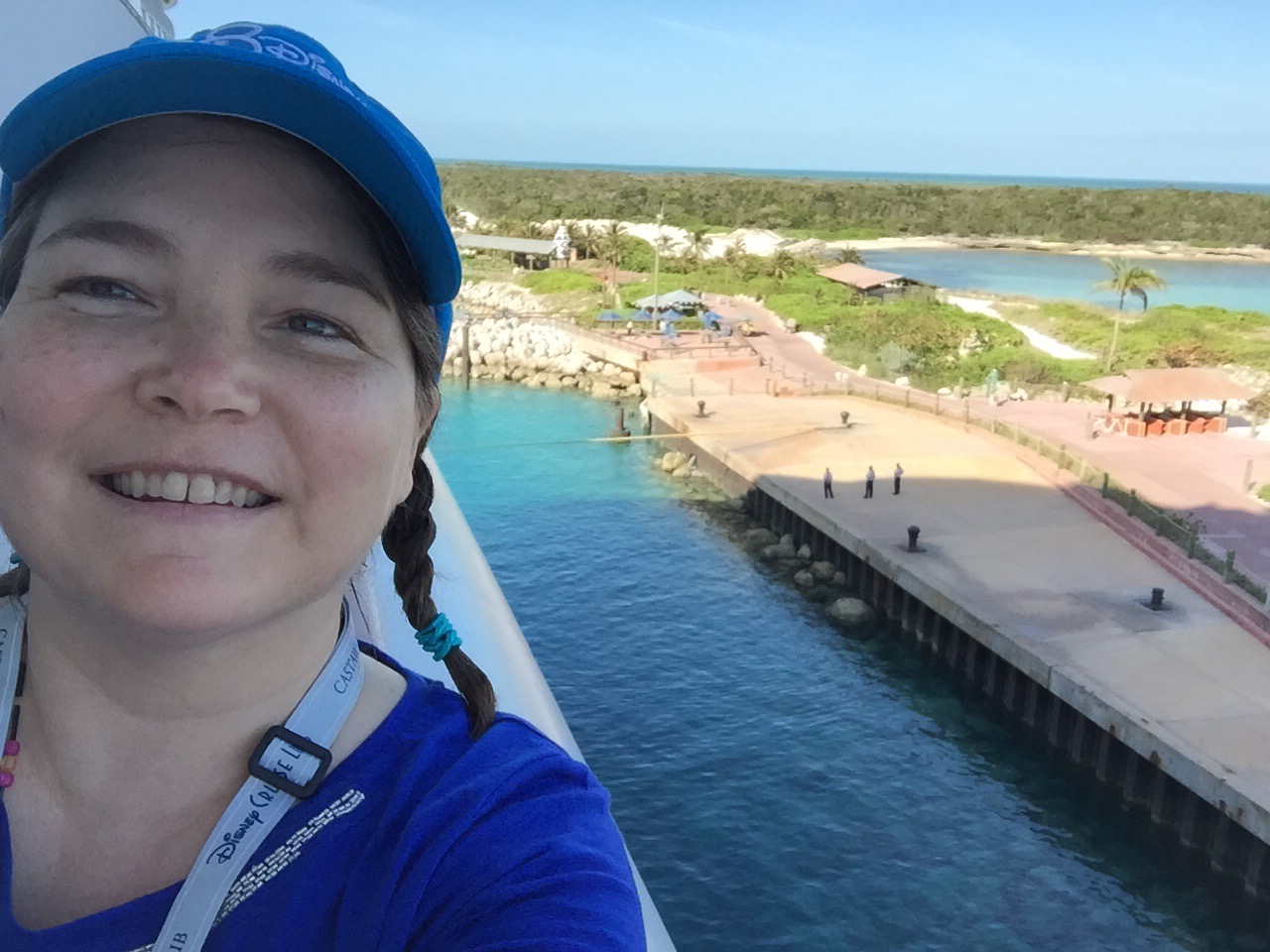 And there were lots of great things to do, like go on a semi-submarine ride in Grand Cayman. 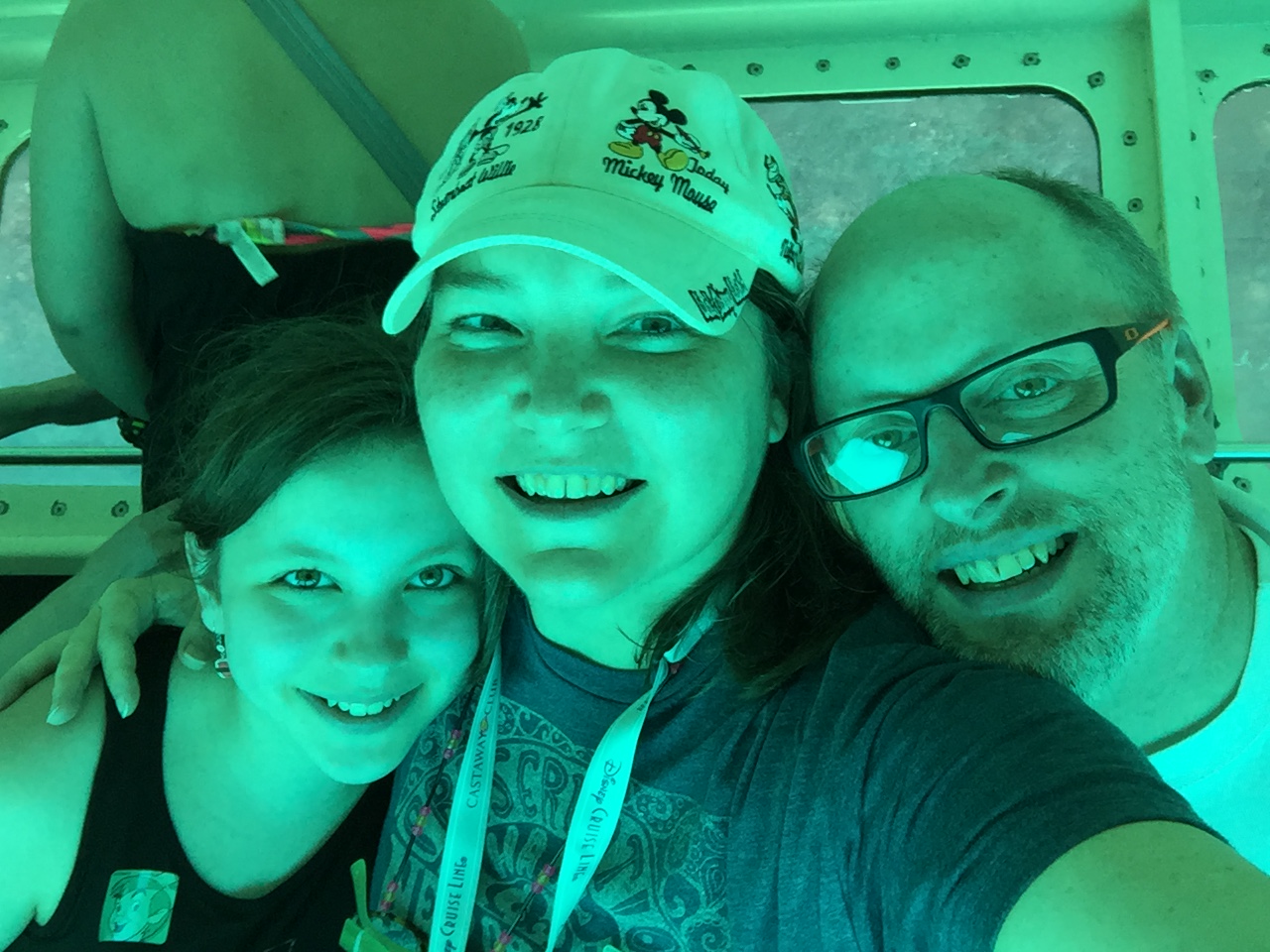 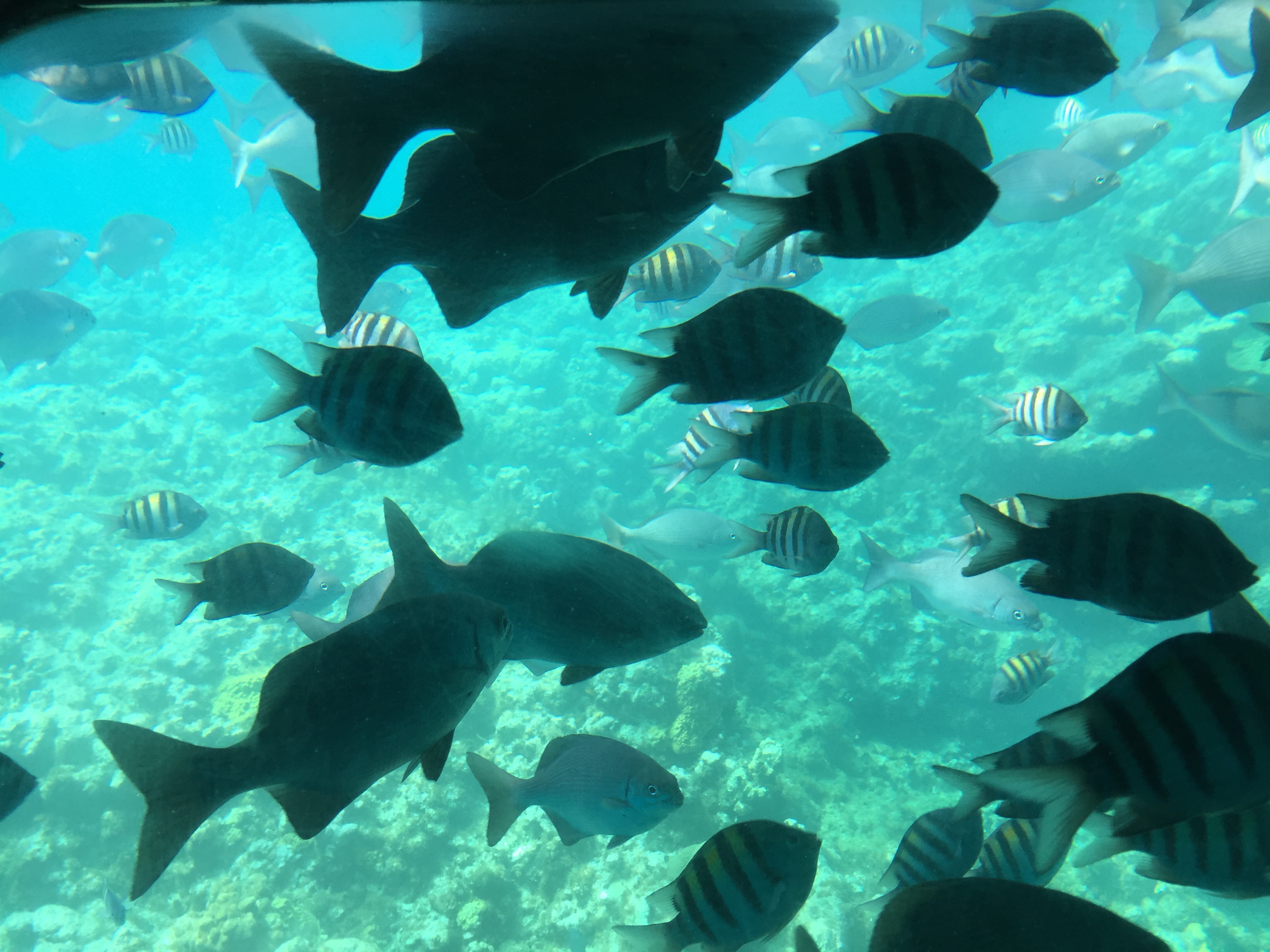 But I have to admit, the fatigue factor was rough for me.

I was exhausted for much of the trip, and it was a challenge for me to cope with such extreme fatigue.  I had to take my steroid pill every other day, and each day I took it I was pretty wiped out.  The first night I stayed up late to see a Star Wars movie in the theater, and by the end of it I was so tired it actually felt dangerous.  I could not get back to my cabin fast enough to go to sleep.

So I gradually (and admittedly, grudgingly) over the course of the week learned not to push myself so hard (who ever thought just watching a movie would be considered “pushing yourself”?)  This involved making some difficult decisions – like going to sleep earlier than the rest of my family while they went to watch a movie that I really wanted to see.  Or taking a nap in the middle of the day (again, while the rest of the family did something fun without me).  Or just sitting and having a cup of tea instead of taking a ride on the water slide.  Or staying on the ship instead of wandering around Cozumel.  Sigh.  I hate missing out on the fun stuff.  But I had to (and still have to) learn to make the best decisions for my tired body.

The Culprit: The Steroid.

My fatigue wasn’t a result of my brain surgery, per se.  Rather, it was a side effect of the steroid I’ve been on – Dexamethasone.  I don’t mean to badmouth steroids.  Steroids are great – they are life saving and were important to reduce the inflammation in my brain before and during my surgery – but they have horrible side effects that are sometimes very difficult to manage.  One of them is “moon face” and another is weight gain.  Just look at the pictures in this post, and you’ll no doubt see what I’m talking about.  There are some days when I’ve woken up and looked in the mirror and just started to cry because of how I look.  But the most challenging steroid side effect for me has been the extreme, extreme fatigue.  It has changed every contour of my life, and this was especially noticeable on our vacation.

My oncologist has been trying to ween me off of the Dexamethazon entirely, but this has to be done slowly and carefully because being on steroids for a long time can cause one’s natural steroid levels (in the form of cortisol, which is produced by the adrenal glands) to drop drastically.  Cortisol is known as the “stress hormone,” and it, in part, regulates our energy.  Normal cortisol levels are 4-23 or so.  Before our cruise my cortisol levels were .4 (that’s point four – super low).  That’s why I’ve been so draggy.

It would be dangerous – potentially fatal – to stop taking the Dexamethasone suddenly because it would leave my body without enough cortisol to function properly.  That’s why the doctor has been gradually trying to ween me off of it, by giving me a little bit less each week, in hopes my body would start producing cortisol on its own again.  Unfortunately, this didn’t happen in time for our cruise.

So My Oncologist Sent Me to an Endocrinologist.

As soon as we got back from vacation (two weeks ago now), my oncologist sent me to an endocrinologist at UVA to try to help me ween off the Dexamethasone.  The first thing he did was to switch me from Dexamethasone to Hydrocortisone, another steroid.  The results were dramatic – I went from not being able to make it through a day without a nap to not napping at all!  What an amazing thing – it felt almost like a miracle!  Hoo-ha!

Not to be indelicate, but after a week and a half on the hydrocortisone I had a horrible bout of diarrhea – three days straight.  I mean it was horrible.  And yet, I didn’t feel bad – I actually felt better than I have in ages.  I have no idea whether this was my body’s way of getting the Dexamethasone completely out of my system, or if I just had a little stomach virus – but the bottom line is I’ve lost a bit of weight and a good bit of my moon face, and I feel much, much better.  I’ll take it!

The next step is for me to reduce my steroid a little this coming Wednesday.  Hopefully, it will go well and my body will start upping its cortisol production naturally and easily.  That’s the plan, at least.  If all goes well with that, the endocrinologist wants me to reduce the dose again two weeks after that.  Then I’ll go in for a blood test, and hopefully, we’ll continue to be able to ween me of the stuff entirely.

It’s a delicate process, though, and I’d really appreciate your good thoughts and prayers for my cortisol levels to rise as hoped.  Sometimes people’s adrenal glands don’t start producing cortisol in the normal amounts again after being on steroids and they develop what’s known as “adrenal insufficiency.”  Sometimes it takes years for a person to ween off the steroids.  I am really, really hoping this will not happen to me.  The steroids are hard, the side effects are harder, and I really want to have my own, real energy back again so I can start exercising more and regain my stamina. 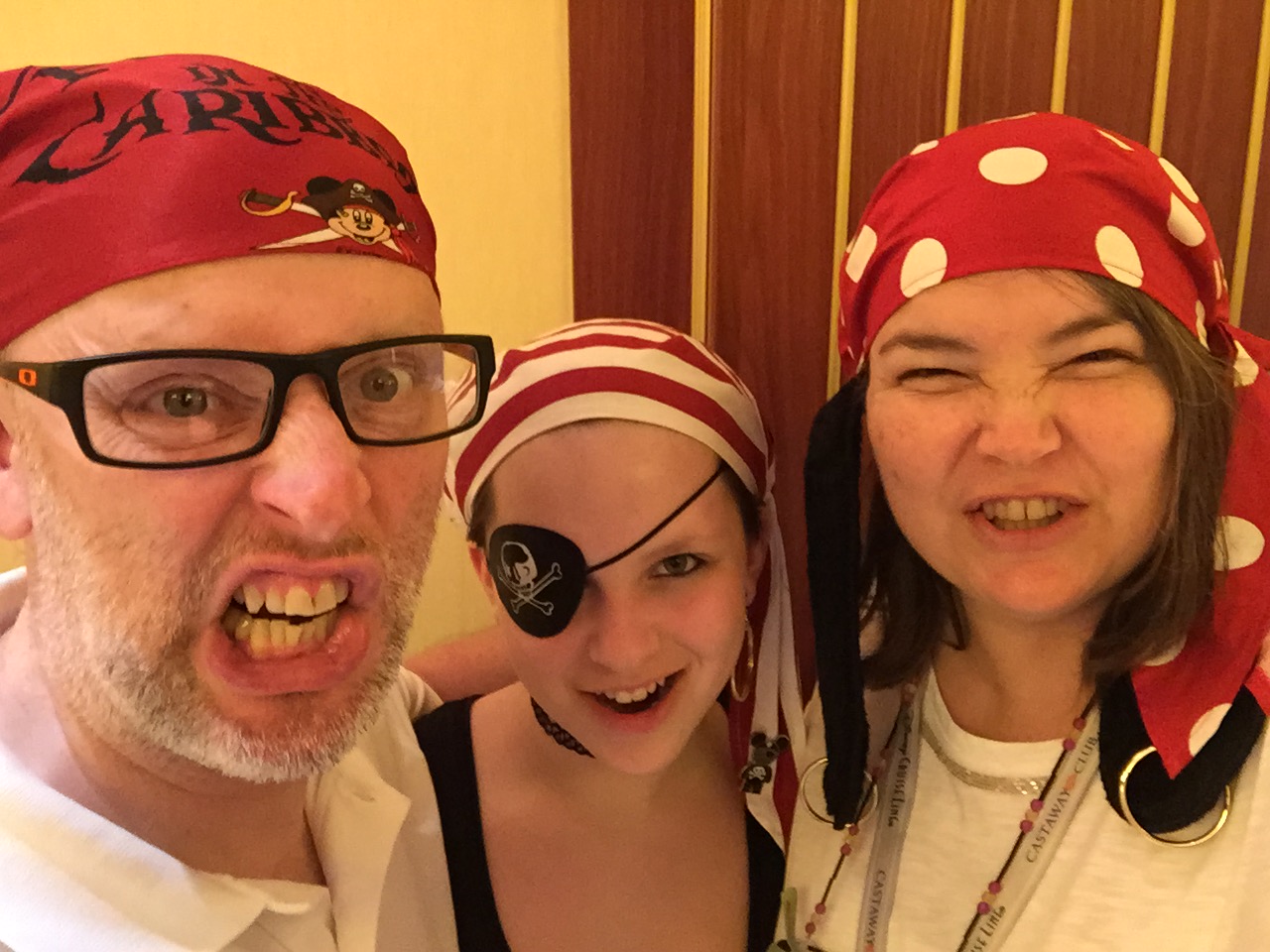 I remember you singing “I did it my way” at SCBWIC the year When the Whistle Blows came out. Good to see you’re still doing things your way! You are an inspiration, Fran.

Wow, you have a good memory, Bonnie! Whether it’s “my way” or simply “headstrong” is up for debate 🙂

You are in the thoughts of prayers of many! Some you probably have long since forgotten about. Hint: Manassas, VA June 2012.

I haven’t forgotten about you, Schenell! In fact, I still have the awesome (and gigantic) train poster signed by all your students hanging in my hallway upstairs. Thank you for your thoughts and prayers. I really appreciate and need them. And thank you for remembering me 🙂

Things sound very positive to me, and I am happy for you all. There’s definitely a new rhythm to your life now, but it continues to be inspiring, even if it can also feel challenging. 🙂

Praying that your strength will continue to return. I’d like to see it happen quickly, but I’m grateful that it is happening.

Some days it feels like it’s happening more than others. I had a setback a couple nights ago that had me back to the doctor yesterday. Been battling some gastro issues (how’s that for saying it delicately?!) Hopefully, I’ll be moving forward again soon, though. Thanks for all your prayers and support.

Gosh, I miss you all so much! I wanted so badly to get to see you while I was in C’ville but of course, YOU were south while I was north! I am hoping to sneak back to town when Toby goes to NY for his retirement dinner and then he brings his replacement down to DC to meet all the key players in Washington. He says that I am not expected to go to NY with him — OK!

I miss you, too, Denise. I am sorry I missed your visit here. Maybe when you come next time I will be feeling better, though. Just let me know the dates when you get them!

Fran, I’m so glad you got away to play! That’s so important!
The healing team (me, Autumn, and?) would love to come visit and pray for you!! Let us know if/when you are up for that!!

Lori – I would LOVE that!! Maybe sometime this week? I can’t wait to see you!

Thinking of you! Despite the required rest times, the cruise sounds like the perfect family get-a-way. I saw the photos and I think you look great. My thought was “their daughter looks JUST LIKE FRAN” only after I saw the last photo did I realize it was you! Here’s to rising cortisol levels and saying “thank you and goodbye” to the steroids as soon as safely possible.
xo
Angela

Thanks, Angela! I like that toast very much! I just reduced down my new steroid this past Wednesday, and I can definitely feel the effects. I am more tired, more swollen. But I am going to keep believing I’ll get there. Patience, patience, patience… and patience!

Oh my that really sounds challenging. Steroids are wonderful and they’re horrible. My oldest daughter had severe asthma and several times a year had to go on steroids. One particular month she took them for about two weeks to get through exams which had the result of weakening her immune system. The result was shingles at the young age of 13-horrible pain. She needed the steroids but they led to misery! So sorry for this because I know you are focused on moving forward and this is putting a major kink in that. Hard to be patient but seems like that’s your new challenge. But you are a woman of great strength so pretty sure you’ve got this. Love ya!

Yes, patience is definitely my challenge right now. My dad is trying to reduce his steroids for rheumatoid arthritis now, too. So at least I have company! Love you, too.

Great to see you enjoying life again. Say hi to Marshall and Hannah for me. Hope to see you all this summer.

Thanks, Phil! We are planning to get to the Burg sometime this summer. If I can get off these steroids first, that would be a huge bonus. Fingers crossed.

Glad the trip had special times and you were able to go. You are in my thoughts and prayers concerning the steroids….would love each see you soon!

Author
Fran
Reply to  Nancy B

That would be great, Nancy. My energy has been pretty low for the last month and a half, so I’ve not been as good at keeping up with my blog as I’d like. I’d love to see you! Maybe you could stop by sometime?